Since 1983, the Northwest Laborers Apprenticeship program has provided quality training for Construction Craft Laborers. Our mission of providing continuous workforce education and training which meets industry needs, builds careers, and increases our employers’ competitive advantage has achieved a significant milestone.

We are honored and excited to announce that our apprenticeship and training program is now accredited by the Council on Occupational Education (COE) and was awarded on December 10th, 2020.

The U.S. Secretary of Education recognizes the Council on Occupational Education as a reliable authority on the quality of education offered by institutions such as our apprenticeship program. As a national institutional agency for the accreditation of non-degree and applied associate degree postsecondary occupational education institutions, it presents stringent qualifications standards to assess the quality and integrity of those who apply.

We are proud to have met these requirements and earn this nationally-honored seal of excellence.

To learn more about the Northwest Laborers Apprenticeship program and begin a rewarding career in construction, visit our website at MyConstructionCareer.com.

President Joe Biden isn’t wasting any time in making good on his promise to be the “strongest labor president you’ve ever had.” He’s selected Boston Mayor Marty Walsh, a 30-year member of LIUNA Local 223, as the next Secretary of Labor. If confirmed, Mayor Walsh would be the first union member to hold the nation’s top labor job in almost 50 years.

Walsh was elected mayor of Boston in 2014 and previously served as both president of Local 223 and the Boston Metropolitan District Building Trades Council. He brings decades of experience with the construction industry and a deep knowledge of the hazards these workers face on the job on a daily basis.

“LIUNA is thrilled that President Biden chose a dues-paying, card-carrying, second-generation Laborer to be the next U.S. Secretary of Labor,” says LIUNA General President Terry O’Sullivan. “His dedication and devotion to the labor movement are unquestioned. I’m confident he will be a powerful guardian for the health and safety of working men and women in every corner of this country.”

The LHSFNA also congratulates Mayor Walsh on his nomination and is proud that the most visible advocate for safety, health and workers’ rights on the job will be one of our own LIUNA members. This is an incredibly important time for workers across the U.S., as the COVID-19 pandemic has put millions of people out of work and caused widespread financial hardship. Millions more workers have continued to put their health at risk on a daily basis in essential and frontline jobs.

If his time as the mayor of Boston is any indication, Walsh is well-suited to handle these challenges. As the COVID-19 pandemic hit Boston, Walsh oversaw the release of sector-specific instructions to guide employers on limiting the spread of the virus and protecting workers. These steps included wearing facial coverings, physical distancing, building healthcare capacity, staggering work shifts and improving ventilation. He’s also supported frontline workers by funding emergency child care and other resources essential workers needed during the pandemic. 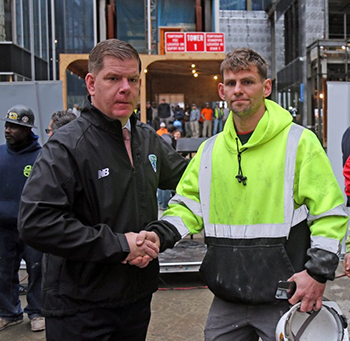 Prior to the pandemic, Walsh fought for the $15 minimum wage in Boston, helped secure paid family leave for workers and has been a vocal advocate for investing in good-paying union jobs in the clean energy sector. In 2016, when two construction workers were killed in a trench that hadn’t been properly protected, Walsh moved quickly to pass an ordinance allowing the city to deny permits based on a company’s safety history. Last summer, after the death of George Floyd, Walsh launched several initiatives to increase equity and fight racial injustice in Boston. During his time in office, Mayor Walsh has made it clear that keeping workers safe and respecting workers rights is a requirement for doing business in Boston.

“Working people, labor unions and those fighting every day for their shot at the middle class are the backbone of our economy and of this country,” said Walsh after his nomination. “As Secretary of Labor, I’ll work just as hard for you as you do for your families and livelihoods. You have my word.”

One of Walsh’s first tasks as Secretary of Labor will likely be directing OSHA to make a decision about whether to develop and issue an emergency temporary standard for COVID-19. We covered the ongoing push for such a standard throughout 2020, including how federal OSHA’s approach to non-binding guidance put worker health at risk and put employers in a difficult position. With President Biden vowing to double the number of OSHA inspectors and ramp up enforcement of existing standards, it’s likely that Walsh will have more resources to work with to accomplish the agency’s goals.

Marty Walsh has never shied away from his union roots. He is proud of his union background and is dedicated to improving the lives of all working people. His track record in Boston makes that clear. We look forward to seeing what he can accomplish as our next U.S. Secretary of Labor.

Some of the items they can help with:

*Passport funds are distributed on an as-needed basis.  The student must be able to relay what they need; they will then be provided with a voucher or a gift card.

Please contact Emily Stochel at 425.786.6512 or email her at emily@anewaop.org to see if you qualify for this resource.

The Tradeswomen Build Nations 2020 has shifted to a virtual platform due to the the pandemic and will be hosting a number of speakers on Saturday, October 17, 2020.

Be sure to check their website frequently, as more information will be announced.

Where to find online training on the site

Due to COVID, refresher programs for ASB.W, ASB.S, and HazMat worker and supervisor are being held virtually. Online classes will soon have their own page, but for now you can find all scheduled classes at: https://www.nwlett.org/training-schedule/#in-local. #NWLETT #LIUNA #OnlineTraining

Notice to everyone entering any NWLETT training location

THE SAFETY OF EVERYONE ENTERING OUR SITES IS A PRIORITY.

PLEASE REVIEW THIS NOTICE AND DO NOT ENTER
IF YOUR ANSWER TO ANY OF THESE QUESTIONS IS “YES.”

• Have you been diagnosed with or tested positive for COVID-19?

• Do you have any of the following unexplained symptoms?

• In the past 14 days, have you been in close contact (within 6 feet) with any person who has been diagnosed with COVID-19?

• Have you been told by any health care provider or Department of Health to self-quarantine or self-isolate due to actual or suspected exposure to COVID-19?

If you answer NO to all of the above, you may enter our sites.

If your answer to any of these questions is “Yes,” PLEASE DO NOT ENTER.

If you are a regular employee or student at these sites, please call us at 360.297.3035 for further information.

We are pleased to announce that NWLETT is now offering online Asbestos Worker/Supervisor recertification classes. The schedule is on the website under the “in-local” heading.

Signing up for an online class will follow the same scheduling procedure as for onsite classes. Please call your hall to request the class; your hall will send the request to Kingston for scheduling.

Please do not hesitate to reach out if you have any questions!

The schedule for online classes will be posted in the “In-Local” section of the schedule.

To gain access, you MUST register through your hall. Thanks for your patience and cooperation.